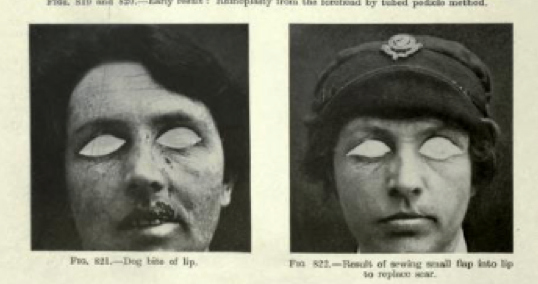 Christine Slobogin reflects on one of the more peculiar conventions of medical photography in this month’s blog post – the first in a series showcasing current postgraduate research in medical humanities at Birkbeck.

Why are human beings so connected to their eyes and so affected by the eyes of others? Of course, the old adage ‘the eyes are the windows to the soul’ could be used to answer this seemingly simple question; but there is undoubtedly a more secular, more personal fascination with the eyes, an attachment to one’s human identity rather than to one’s spirituality or soul.

It may come as a surprise that a physical manifestation of this timeless concept—that the eyes function as the seat of a person’s humanity—appears in textbooks and images intended to teach plastic and reconstructive surgeons how to mend a face ravaged by war or disease. One of the most famous examples of this visual oddity is the 1920 publication Plastic Surgery of the Face, published by Sir Harold Delf Gillies. Gillies is considered to be the father of modern British plastic surgery; he is best known for his experimental and pioneering treatments of facially injured servicemen during the First World War. In the last section of Plastic Surgery of the Face (‘Plastic Surgery in Civil Cases’), the eyes of patients with graphic facial injuries have been manually cut out of the photographs, giving the pages an ad hoc, craft-like appearance. These cases are mostly of lupus, syphilis, and hare-lips rather than bomb blasts and shell fragments to the face—the injuries that the rest of the book covers. Gillies does not mention in the introduction to this section why he has decided to cut out the eyes of these patients rather than the servicemen in his other chapters, but the practice suggests that the civilians in 1920 had more of a right to anonymity than the soldiers in the earlier sections of the book. The question of who ‘deserves’ anonymity is one for another piece of writing, but it is clear from Gillies’s book that he (or the ethical statutes in place in his field) marked civilians as needing that violent proof of de-personalisation in medical photographs, executed by cutting out their eyes.

The excising of eyes mirrors the mutilation that appears in the servicemen sections of Gillies’s textbook and throughout the First World War. The nurse Vera Brittain wrote a letter saying that she had seen men ‘without faces, without eyes, without limbs, men almost disembowelled, men with hideous truncated stumps of bodies.’[1] Eyes were frequently shot out or blinded by mustard gas, exposed and vulnerable targets in their viscous liquidity. In the First World War, during which Gillies did much of his revolutionary surgery work, over sixty thousand men in Britain were wounded in the head or in the eyes.[2] In the ‘Plastic Surgery in Civil Cases’ photographs, Gillies and his publishers perform and approximate eye injuries; in the uncensored images the violence done to eyes is often real and physical. 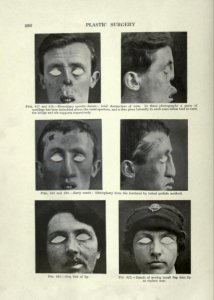 The discourse of the world passes through open eyes, eyes open at every instant as for the first time. —Michel Foucault, The Birth of the Clinic, 1973.[3]

Eyes and hands are the two most important body parts for doctors and for diagnoses, and eyes have an irreplaceable role in the discourses of the medical gaze, as delineated by Michel Foucault in The Birth of the Clinic. The physician looks at his patient in an objectifying manner, in a way that is intended to bring the mysterious questions about the human body, illness, and injury, to light. But what happens when the eyes of the patient are literally excised from the medical narrative? By cutting the eyes out of the photographs of patients, Gillies’s textbook denies the subject of the photographs any agency in their own treatment, while simultaneously granting them anonymity. They cannot gaze back out at the viewer, the reader, or the doctor looking at their cases. This visually suggests that they were not involved in their cases in the first place—from the ‘before’ images to the ‘after’ images these civilians are blind to their own pathology. This process further denies the patient any sort of gaze while giving more power to that of the plastic surgeon—a person already in a position of immense authority and influence. Foucault speaks often of the ‘doctor’s eye’ in The Birth of the Clinic, and with an eyeless patient it is the doctor’s eye that dominates—its presence implicit in these images through the absence of the patient’s eye.

Ann Millett-Gallant writes that the bodies of the injured were made anonymous in this way ‘for the benefit of the patient and the physician or other viewer, such that the subject could be examined with objective, impersonal disinterest. Shielding of the eyes was seen more predominantly in especially freakish or curious subjects and those of lower socioeconomic status.’[4] Millett-Gallant writes that this blocking of the eyes was done to foster disinterest in medical contexts. A modern day viewer looking at these images from a visual culture perspective, however, would tend to be more interested in a freakish-looking page of facial injuries, made even more ghoulishly curious because of the arts-and-crafts style in which the eyes are literally carved out of the paper.

In my research of World War II photographs of facially injured patients, I have encountered a related problem. These photographs, taken by Percy Hennell in plastic surgery wards during the war, can only be shown to others in academic work if the images have been published previously, if the person is far from recognisable (for example, if the photograph is only of their arm, or if there are several extraneous flaps of surgically-constructed flesh blocking their visage), or if their eyes are blacked out. The reasoning behind this is that if the eyes are covered, the person is no longer recognisable. This is meant to prevent distress for the family members or perhaps even the patients themselves. For the sake of absolute posterity, these rules assume that any records less than a hundred years old could contain images of people still living—even if in this case that is highly unlikely. 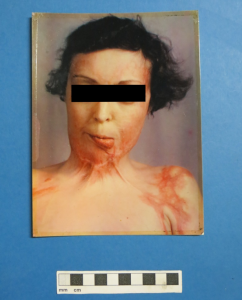 This highlights a key problem within the aesthetics of the practice of surgical anonymity in Gillies’s textbook. His practice of excising eyes turns the supposedly educational and objective images into morbid, cruel, and eerie oddities. Like Halloween masks, they titillate the viewer who desires to delve into dark visualities of the past. Similarly, an issue with the modern day photographic anonymity policy in place is that it takes away any agency that perhaps the patient would have had if we as academics were allowed to showcase their eyes; it turns them into curiosities like the textbook patients. This agency is denied in the 1920 textbook, but it is an agency that could be discussed in academic work on the Percy Hennell images today—if the eyes could be seen. Percy Hennell’s coloured photographs of facial injury patients may look less ghoulish than the 1920 black-and-white images, but they still push the viewer to yearn for a hint of what’s behind the black bar or square—a want for the morbid unknown. Behind the black boxes, what do those eyes reveal about the pain or anger within these patients? Without a clear sense of the eyes, the viewer’s curiosity can make up a narrative perhaps far more dramatic than what actually is in the uncensored picture. Without a clear view of the eyes, the viewer sees less human and more morbid specimen.

The main purpose of Hennell’s photographs was originally to teach surgeons, like the textbook photographs. Yet because they were not published in a textbook, Hennell and the surgeons did not see a need to de-individualise the patients (who were a mix of servicemen and civilians). In images of facial injury, as Erin O’Connor writes, the subjects ‘are frequently dehumanized, their ravaged faces and damaged bodies put on view while their eyes stare morosely into the camera like a silent affront.’[5]

The current policy of patient confidentiality, requiring that we block out the eyes of Hennell’s patients, takes away the affront that O’Connor describes. Blacking out the eyes further focuses the viewer on what Emma Chambers calls, in drawings of facial injury, ‘the compositional focus of the portrait, the gaping wound at the centre.’[6] These pictures become all about the severity of the wound (of course, the original surgical purpose) and not about the human behind the wound (which is often what a non-medical viewer is searching for in these images). 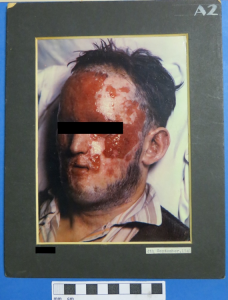 The lack of eyes in the textbook or in the Hennell photographs disavows the viewer of this discomfort foisted upon them by the eyes of the patient. Excised eyes allow the viewer to instead view these people as inhuman wounded curiosities. O’Connor states that patients are dehumanized in medical photography because of the eyes, but the Gillies and Hennell photographs show that this is even more so the case when the eyes are not present.

Jason Bate writes about the difference between photographs with eyes and those without, stating that looking at the photographs with blocked eyes allows him to avoid the discomfort of the confrontational gaze of the patient, within which is read awareness of their exposure to the camera’s, the surgeon’s, and the viewer’s gaze.[7] When the eyes are not present—in either the black-and-white images in Gillies’s textbook or in the coloured photographs by Percy Hennell—the viewer is, in a sense, let off the hook. They do not have to confront the humanity of these patients as readily as they do when pain, trepidation, or dependence can be read into the open and pleading eyes of those gravely wounded in war. The viewer can pretend that there are no politics of submission and dominance at play here in the sensitive tango between the medical photographer / medical complex and the vulnerable patient. Meant to provide confidentiality and sensitivity for the patient, the cutting out or blocking out of eyes takes any agency or individual identity that these patients had away from them, giving it to the viewer without asking them to engage with their humanity or personhood. 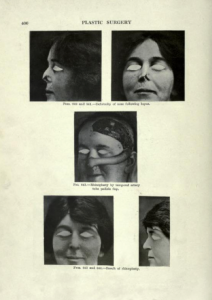 [7] Jason Bate, ‘Disrupting Our Sense of the Past: Medical Photographs that Push Interpreters to the Limits of Historical Analysis,’ in Approaching Facial Difference: Past and Present, ed. Patricia Skinner and Emily Cock, Facialities: Interdisciplinary Approaches to the Human Face (London: Bloomsbury Academic, 2018), 196.